THE DAWN OF a new day in Nutancia was the kind of breezy, radiant morning that would spur you on with hope and inspiration. However, Aly was short of both, just when he needed them desperately. For hours, he had been pacing back and forth in his small burrow. In sharp contrast to the glorious sunrise, he could only see gloomy days ahead. He couldn’t stop thinking about the worst. What am I going to do? We have nowhere to turn to. We’re doomed, he thought.

Nutancia was well-known for its resources of nuts. At the heart of this squirrel country, there was a deep square maze where nuts could be found every single day. It contained every variety: walnuts, acorns, pecans, almonds, pistachios; the list goes on. The nature of the maze dictated that these nuts would emerge from the ground and make their way onto the surface.

One challenging part about it was that the place and time in which the nuts emerged were random. This was a big deal for such a deep maze with endless loops and dead ends. No matter how many hours you spent, if you were at the wrong times and places, you would come away with nothing.

Four squirrel clans lived in this country, each near a corner of the maze. The clans spent most of their time hunting for these nuts to feed their squirrels. Each corner of the maze had an entry. Every day, hordes of “nut miners” as they were called, would go into the maze via these entries, scour for the nuts, and return with their collections.

The maze was an unforgiving place where the clans competed fiercely to beat each other to the nuts they so desired. Three of these clans, Groar, Globb, and Grint were known for their large populations and strength. They prepared their miners well through sophisticated training regimes. Because of this, they were involved in a perennial competition to outnumber, outmuscle, and outthink each other, setting higher standards all the time.

Meanwhile, the other clan, Gliff, was smaller in number. The methods they used to train their miners were nowhere near as good as those of the other three, and because of that, the desire to compete was not on their agenda. As long as they managed to scrape together enough nuts to live adequately, they were happy. 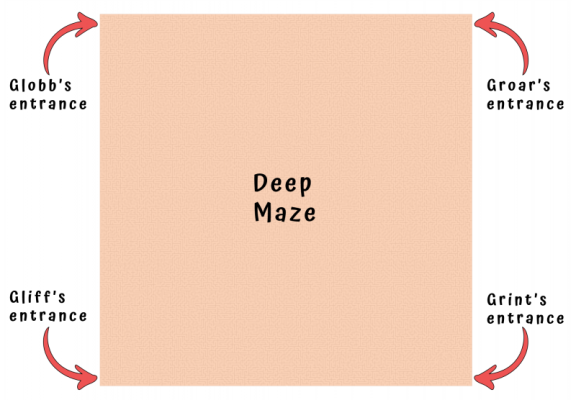 Sometimes, droughts happened, and that’s when they really struggled. Thankfully, the droughts never lasted too long, and every time, they would manage to build just enough reserves of nuts to keep them going. Given a choice, they would jump at the chance of having a more comfortable life. But they weren’t complaining.

Things, however, took a turn in the past year. The drought was nothing like what they had seen before. Nuts had become much harder to come by, and as a result, their reserves steadily declined. With no sign of this improving, for the first time in their lives, they were staring at the possibility of prolonged starvation.

Gone were the days when the Gliff town was buzzing as squirrels met and enjoyed each other’s company. The younger ones were told to stay at home instead of exploring life out in the woods. Conserving energy in the face of scarcity was one thing, but, more than that, the misery of facing a bleak future was dampening their spirits. Their joy and optimism were slowly going away.

Their lives were now all about struggle, grinding by each day with barely enough nuts to eat. Most of the time, they would have to ration the food supply among themselves and stay hungry for days, sometimes even weeks.

Going into the maze became an even more arduous task for the miners. They were feeding off scraps and would be lucky if they returned with something. They knew it’s time they changed their ways, or otherwise, they would be facing extinction.

The onus was on Aly, the leader of Gliff, to come up with something. As he finally sat down on his chair, he thought, This is nothing like what we’ve seen before. What makes me think there’s a way out?!

Aly came up through the ranks pouring his blood, sweat, and tears for the sake of the clan. He had been a loyal general to the clan’s previous leader and gave everything he had to offer. No leader was more genuine and cared more deeply about his clan than Aly.

He had done it all. In fact, he had been a nut miner himself many years ago. That time was still one of the highlights of his life. He relished both the thrill of exploring the maze and the fulfillment of returning home with food to feed the squirrels. He knew the ins and outs of the mining operations and couldn’t help from taking a hands-on approach even to this day, even when he had Lex, whom he entrusted to lead the mining team.

But even he had no idea of how to turn such a colossal problem around. Uncharacteristically, he had finally let the pressure get the better of him. Most of the squirrels in his circle had, by now, gotten the bitter taste of his mood. Aly was in shambles and couldn’t get his act together.

But he knew he needed to. The other clans are getting stronger than ever, he thought. If I can’t find a solution, Gliff will live on borrowed time. It’s now or never.

He needed to come up with a plan. Maybe I should talk to Moe and see if he has anything interesting to say.

Being a true leader, Aly had consulted with most, if not all, of the squirrels in his clan. Moe would probably be one of the last.

Moe was one rather curious character. He chose not to become one of the miners, unlike most of the squirrels of his age. Because of this, he wasn’t well received within the clan. They accused him of being selfish and a slacker.

But Aly, like the rest of the clan, also knew that Moe was different from most in the way he saw things that others didn’t. He had come up with inventions that were totally unheard of. Once, he showed a strange thing called a communication device that could be used by squirrels to talk to each other. Another time, he was showing a box with a screen showing texts and images. It’s just that they didn’t see the point.

Aly tended to agree that Moe should be spending his energy and time helping the clan find food, not pursuing futile endeavors. But right now, Aly just didn’t care. Nothing to lose. I’ll pay him a visit tomorrow.

“So, what brings you here? I don’t think we’ve spoken much before, have we?” Moe asked as Aly made his way into his burrow.

“Moe, you know our situation. It’s not getting any better, and I need any help I can get. We’ve been pulling our fur out trying to figure out what else can be done, but we’re nowhere near any solution.”

“What makes you think I can help?”

“I know the squirrels haven’t been too kind to you,” Aly said. “But you don’t know this part. They all told me the same thing about you. They said that you’re forward-looking and never short of ideas.”

“What do you expect from me, actually?”

I could do with a miracle. “No expectations. I just thought it’s time I met smart squirrels like you, get your thoughts, and who knows, maybe we can find a way to turn this around.”

Moe didn’t seem to be interested at all. “I really don’t know how I can help. Sorry to disappoint you.”

Aly moved within inches from Moe and stared him down. “Listen, Moe. This is now about life and death. As much as I hate to say that, it’s the reality. Even if you don’t care, it will hit you soon enough!”

“Don’t get me wrong,” Moe said. “I just don’t know how to help. Everything that I’ve been working on was just a hobby. That’s it, nothing more than that. I don’t know how they can be useful to you.”

How can you be so detached from reality?! “I’m sure you can do better than that. Don’t tell me there’s nothing you can do with your inventions. What about those tiny little devices, or the funny-looking boxes, or the nut scanners—”

“That just gave me an idea,” Moe said, his eyes sparkling.

“Then tell me about it,” Aly demanded.

But Moe became subdued almost as quickly. “But, on second thought, I don’t know if it’ll work. I’ll probably just waste your time. It’s just a theory and I’ve never really done it for real, let alone for this scale of a problem.”

“Moe, let me be clear,” Aly said, raising his voice. “I don’t know why I’m putting so much trust in you. But I don’t care because our clan is now in deep trouble. I’ll take whatever chance I have. Now, I just have one question for you. Do you believe in that idea?”

“Turning that idea into a plan.”

Moe’s face turned pale. “I don’t have good feelings about this one. I don’t know where to start, really. But if you insist, can I ask for a couple of things?”

“Fair enough. What are they?”

“First, I want you to promise to have patience,” Moe said. “I know time is not on our side. But there are steps to be taken in anything that we do, even more so for this plan. If we rush through things, I’m afraid we’ll end up going nowhere.”

“You know I’m not a patient squirrel. But sure, I hear you loud and clear. What’s the other request?”

“I need another squirrel to join us and work on this plan. And I think I know who that would be.”

Liked what you're reading?